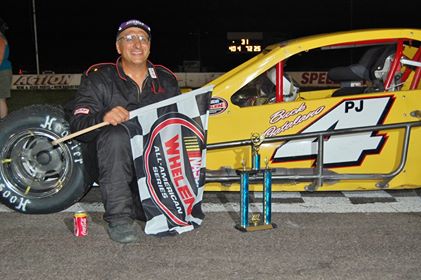 It seems that every track has that one driver. You know the one that the fans either hate or love. There are a number of factors that contribute to this designation. Probably, the biggest factor is that the driver wins too much. If not that, then the aggressive style of their driving is to blame. Throw in the fact that the driver is big and strong and you have the ingredients for the track favorite or track villain. Spencer Speedway’s designated driver seems to be Buck Catalano. This is based on the aforementioned factors. Love him or hate him, Buck keeps showing up in victory lane. He has done this his entire career. A race career which spans over thirty years.

The interest in racing started for Buck in the late fifties. His parents would take him to Spencer Speedway on a regular basis. Buck really got interested when his Uncle Jo Jo started racing Late Models at Spencer. Buck remembers, “The last year my uncle raced, I started selling hot dogs at Spencer. The next season, I was on the track crew. Some of the kids I knew (Dan Mason and Dean Beh) started racing Street Stocks. My brother, Charlie asked me if I wanted to race. Well of course I did and we purchased a 1970 Chevelle.” This took place in the middle of the 1975 race season. Buck continues, “My first race was at Fulton. I didn’t know when to go or when to turn. It was a learning experience that I never forgot.” Buck finished out the year racing at Fulton, Spencer, and Lancaster. Buck said, “I won a feature at Spencer that first year. When I got to victory lane, I didn’t know what to do. This was a very exciting moment. A moment I will remember the rest of my life.” Buck may have been a stranger to victory lane but it soon became a second home.

Buck became a student of racing. He would study his two favorite drivers intently. Buck said, “Richie has always been my favorite driver. I learned a great deal from him and Maynard Troyer. These guys would drive it deep into the corner. Some how they made the car stick on the outside groove.” It would take awhile before Buck mastered the technique. By 1977, consistent weekly finishes were boosting Buck’s confidence. Buck said, “I continued to try and work the outside groove. Initially, I had a lot of reservation about running on the outside. Once I got the setup right, the car would stick. You use the momentum and time the acceleration. This allowed me to catch and pass cars coming off the turns.” The persistent paid off in the 1978 racing season. Buck won his first championship (Strictly Stock) at Fulton Speedway. He backed that up by winning 1979 Spencer Super Stock Championship. Buck remembers, “The 1979 race season at Spencer was excellent. We won all the races except two.” The domination of the class continued in 1980. Buck captured the 1980 Spencer Super Stock Championship. Another Super Stock Championship in 1981 at Lancaster Speedway. Buck had established himself as a winning driver. He began to explore bigger challenges.

The early eighties had brought success to the Ontario racer. Buck now set his sights on a bigger prize. He and his family moved down to Charlotte, North Carolina. Buck said, “My idea was to race on the NASCAR circuit. We moved down south and started knocking on doors. I volunteered to assist Alan Kulwicki’s team with the race equipment. This experience taught me how expensive it was to fund a team. The other lesson I learned is the huge amount of time that it takes to prepare a car.” Buck also helped Ernie Irvan on his late model at Concord Motor Speedway. Eventually, he decided to regroup and came back north. When he returned, Buck teamed up with Ralph Stoppiello to form a Late Model team. Buck and Ralph wanted to establish the team and race locally. Once the team was seasoned, they would attempt to compete at the NASCAR level. They did achieve the first stage of the plan. In 1989, Buck captured the Spencer Late Model championship. The team continued racing at Spencer, Holland, and Lancaster. Buck won his second Spencer Late Model championship in 1992. He continued to race the Late Models through the 1994 race season.

In 1995, Buck started to compete in the Grand American (Sportsman) Modified class. This came about when another racer needed a relief driver. Buck remembers, “I got my start with Doug Ferrin. He asked me to fill in for him at the first caution. The race had only gone a few laps and the caution came out. Doug brought the car into the pits and I took over. This was my first time in one of these cars. I got back out on to the track at the tail end of the field. The green waved and I headed to the front.” In three laps, Buck had taken the car from the back to the top spot. He went on to win the race. Buck returned in 1996 to drive full time for Doug. At the end of the season, Buck claimed the Spencer Grand American Modified championship. In 1997, Buck finished second in Grand American points at Spencer. He went on to win the 1997 Oswego Race of Champions Sportsman race. The 1998 race season was a successful one. Buck won his second Grand American championship at Spencer. He also claimed the 1998 NASCAR Weekly Racing Series Short Track Division national championship. Buck was flown down to Nashville to accept the NASCAR title.

In 1999, Buck started racing Modifieds. Buck said, “I got together with Don Ryerse to compete in the Modified class. We struggled most of the year. The handling was never quite right. We eventually figured out the problem which was the rear shocks. Finally, at the end of the year, we won a feature.” Buck also went on to win the 1999 Oswego Race of Champions Sportsman race. The #4 racer continued racing with the Ryerse team through the end of the 2002 race season. During that time, Buck was nearly unstoppable. He won the 2001 and 2002 Spencer Modified championships. Buck also claimed another (2002) NASCAR Weekly Racing Series Northeast Region Modified championship. Once again, he finds himself in Nashville accepting the NASCAR title. In 2003, Buck changed teams. Buck started driving for Craig and Sharyn Stevens. Buck remembers, “Craig was offering both me and Patsy (son) an opportunity I could not refuse. I got a brand new Troyer and my son as a teammate.” Buck and Patsy both benefited with teaming up with the Stevens. Buck has been in the top three at Spencer every year and finished second in Modified points last year (2006). Patsy has won the 2004 and 2005 Spencer Modified championships. Buck said, “We have a great team. Craig, Sharyn, and Donnie treat us like family. You couldn’t ask for a better owner.”

In over thirty years of racing, Buck has received a lot of support. Buck realizes that many have contributed to his success. He is very grateful for these special people and wants to acknowledge them.

His Wife, Carol who has given him the greatest support and love. Patsy (son) and Robin (daughter) Buck’s Mom and Dad. Uncle Jo Jo and Aunt Mary Buck’s brothers, Dave, Charlie, Al, Sam, and Pete. Buck’s sister, Cathy who is his biggest fan. Ralph and Dale Stoppiello Bud and Sylvia Hendershot Terry and Alison Schleede Doug and Laura Ferrin Craig and Sharyn Stevens Bruce and Madge Burdick Randy and Sharon Scott Craig and Linda Waasdorp Don and Michelle Ryerse Dave and Kim Farnan Rodney and BJ Mitchell All the guys that have helped on my crew over the years All the fans who come out and support racing

Buck said, “These special people mean a great deal to me. Thank you for your support, ,love, and friendship.”

Buck has been racing over thirty years. No doubt, he is a fierce competitor who never gives up. He has won numerous National and track championships. The #4 racer has one hundred and twenty-five career victories at Spencer Speedway. This gives Buck the distinction of most wins in the tracks history. Buck’s total career wins exceed one hundred and sixty. The Ontario racer has wins at Spencer, Lancaster, Perry, Tioga, Holland, Oswego, Fulton, and Cayuga Speedways. He is very proud of his accomplishments. His greatest pride though is his family and friends. Buck has solidified his place in racing history. No wonder there are so many cheers and yes, some boos. The track villain or track favorite? I don’t think so. The title that best describes Buck is champion. A champion who desires a few more titles.